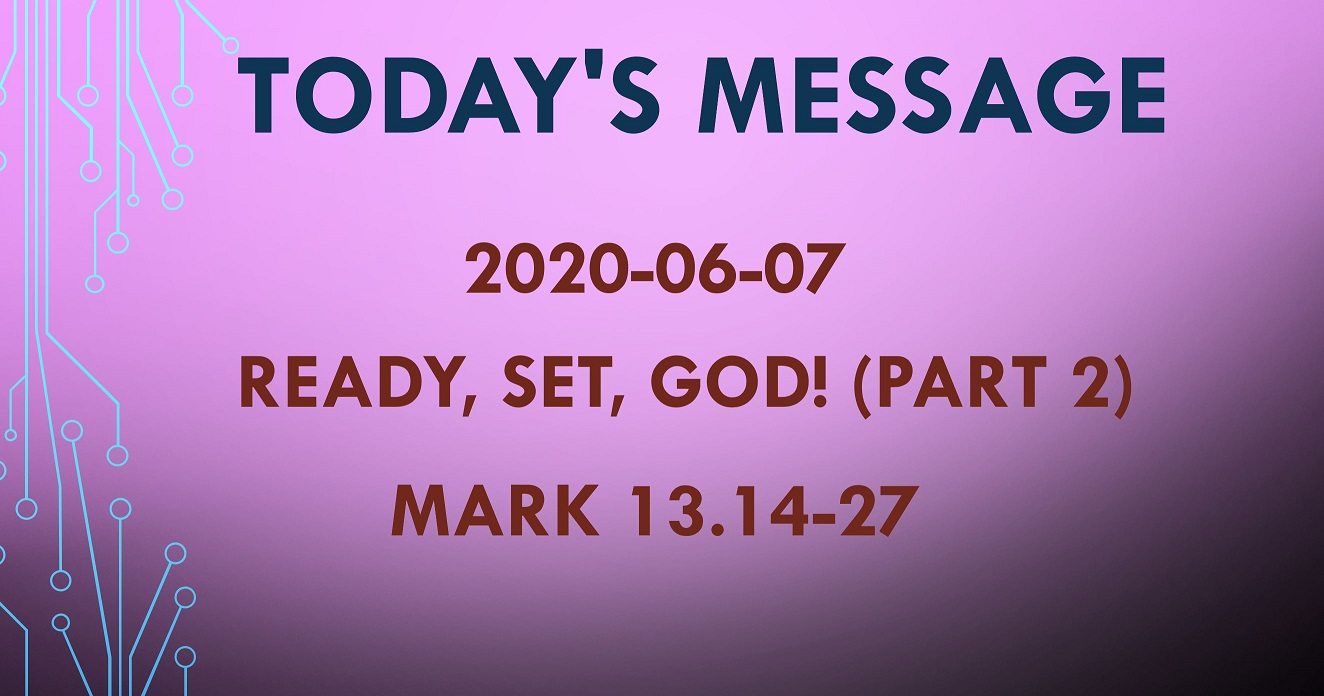 Greetings everyone. I am Pastor Jerry from the First Baptist church Orion Illinois. It is so nice to be able to spend some time with you all in fellowship with the Lord. Thank you and God bless you for being with us today.

Yesterday I was introduced to a very cool DYI kind of solution. My neighbor Billy took an empty 2-Liter bottle with the cap on, and he turned it on its side. Then he sliced off the top of it length-wise and filled it with Apple Cider vinegar. In doing this he made himself a rust remover bucket. He showed me how he took an old axe head that was covered with rust over the years, and by putting it in that rust-remover-bucket for a week, it now looks almost like new.

I use this most timely illustration to say that one day soon, God is going to make all of us new again as well. He is going to take our sin-filled world through a time of tribulation and remove all our blemishes and make us spotless clean.

Today, we are going to hear the second part of a three-part message called Ready, Set, God!

Please turn in your Bibles to Mark 13.14 of God’s Inspired, Infallible and Living Word. But let us first start with Prayer.

Last week we read through the first part of Mark 13 where Jesus told His disciples that the Temple would soon be destroyed, which it was shortly there after. He said that people and nations will turn against each other, which they have many times. And then He said that when we see all this happen, we are to endure.

Coincidently my family and I have been reading from the book of Revelation. In that, we read yesterday about how Jesus told John to write to the church of Philadelphia where He had much positive things to say about their endurance.
It reads: “Since you have kept my command to endure patiently, I will also keep you from the hour of trial that is going to come on the whole world to test the inhabitants of the earth. I am coming soon. Hold on to what you have, so that no one will take your crown.”

So our endurance during the trials will be rewarded brothers and sister. I don’t know about you, but I take a lot of comfort in that understanding.
Again today we are going to read about the coming Great Tribulation. I am going to read our verses today in their entirety and then break it down a little afterwards. Starting at verse 14, it reads:

14 “When you see the abomination of desolation standing where it should not be” (let the reader understand), “then those in Judea must flee to the mountains. 15 A man on the housetop must not come down or go in to get anything out of his house, 16 and a man in the field must not go back to get his coat. 17 Woe to pregnant women and nursing mothers in those days!

18 “Pray it won’t happen in winter. 19 For those will be days of tribulation, the kind that hasn’t been from the beginning of creation until now and never will be again. 20 If the Lord had not cut those days short, no one would be saved. But he cut those days short for the sake of the elect, whom he chose.

21 “Then if anyone tells you, ‘See, here is the Messiah! See, there!’ do not believe it. 22 For false messiahs and false prophets will arise and will perform signs and wonders to lead astray, if possible, the elect. 23 And you must watch! I have told you everything in advance.

24 “But in those days, after that tribulation: The sun will be darkened, and the moon will not shed its light; 25 the stars will be falling from the sky, and the powers in the heavens will be shaken. 26 Then they will see the Son of Man coming in clouds with great power and glory. 27 He will send out the angels and gather his elect from the four winds, from the ends of the earth to the ends of heaven.

I got to be honest with you dear saints, when I read these words, these prophecies, it frightens me a little. Scripture speaks of the coming destruction and cataclysmic world events that turns our mostly peaceful existence into chaos and despair. That should frighten most anyone I would argue. Even today we feel the stress and pressure of so many challenges circumstances, but this isn’t but a nuance compared to what Mark and John wrote about in these passages today.

The first turmoil our verses mention here is about is the “abomination of desolation standing where it should not be”. Then it says “those in Judea must flee to the mountains”. That abomination already took place when the Temple was destroyed and Israel was scattered, but not only to the mountains but to all the other nations as well. And the Romans not only destroyed it, but General Titus even placed his idol on the site where the Temple once stood.

So the prophesy Jesus offered here already has been partly realized. That should give us now some confidence that the rest of His prophecy will in fact take place.

Related to these events, back to Revelation 3:13, Jesus said “I am coming soon”, but it is that happens before He comes is what causes us much trepidation.
Some like me believe that Christians will be spared much of that Tribulation. That Jesus will Rapture or take out His true followers before the Great Tribulation starts. We get that from Revelation 3:10 where it says, “Since you have kept my command to endure patiently, I will also keep you from the hour of trial that is going to come upon the whole world to test those who live on the earth”. Others interpret this to mean that the church will go through the time of tribulation, but God will keep them strong in the midst of it. Whatever the case, our emphasis should be on patiently obeying God, trusting Him and enduring no matter what challenges we might face. Do you trust God with your troubles?

In addressing that phrase “time of tribulation”, you should know this is described in the Bible as a seven-year period. And according to the prophet Daniel, chapter 9, it is a time of deadly destruction. Satan and his demons inflict terrible destructive damage and death upon the people. The Antichrist shows up, along with the false prophet, and they take over and dominate the world with their cunning power, and they are aided and abetted by evil men who form their armies. Then half way through that seven-year period comes what is called the great tribulation. The Bible refers to it as a three-and-a-half-year period or twelve-hundred and ninety days when it will be most severe.

Then Jesus comes. According to Revelation 1:7: “[Jesus] comes with the clouds and every eye will see Him.” And Matthew 24:27 says, “As the lightning comes from the east and flashes to the west, so will the coming of the Son of Man be”.

It’s not going to be any secret, Jesus is going to somehow present Himself across the entire sky scape; plus He’s coming with ten thousand of His saints according to Jude 14. And that will usher in the eventual collapse of the whole universe.

It is a scary proposition to say the least. I don’t think there has been a Hollywood movie yet that portrays well the totality of what is yet to come. I think that our limited mind is not able to conceive what we have laid up a head of us. Likewise I think that when the Apostle John wrote the book of Revelation while he was a prisoner on the Island of Patmos couldn’t conceptualize all of what that would look like. At that point there wasn’t anything yet designed to cause such devastation. Now we have a lot of destructive weapons that should cause us to shake in our boots. But when God writes something He presents it in such a way that can stay the course of time, and it will be proven out, that I promise you.

Well, next week we’re going to talk about more about Jesus’s final coming. In Luke 21:28 Jesus said “When these things begin to happen, look up and lift up your heads, for your redemption draws near.

We’re not in that time of Tribulation just yet as all these things haven’t unfolded yet. And as I said, the good news for us is, I believe the Rapture of the church will take place first, and thus we are protected from that tribulation event when all these things finally take place. The Apostle Paul calls it a “mystery” now revealed. He wrote, “Listen.. We will not all sleep, but we will all be changed—in a flash, in the twinkling of an eye, at the last trumpet. For the trumpet will sound, the dead will be raised imperishable, and we will be changed” (1 Corinthians 15:51–52).

However the main understanding I wish you to take away this day is that Jesus is coming soon. However before all this unleashes itself on the world, I believe the Lord is going to collect His church; and from my perspective, it looks like that could happen at any time. As we see before us, right now this chaotic world is shaping-up into what looks like a Revelation kind of staging. So be ready church. As Jesus says in verse our 23 here, “I told you all these things in advance.” So we are without an excuse. Now go preach that Gospel message. This charge goes right along with His Great Commission. For He want’s to save as many as possible before that day of destruction. I hope you can feel His compassion and purpose in these words we read today.

Again, this is the second part of a three-part message entitled Ready Set God! Next week we will talk more about The Great Tribulation and Jesus’s instructions for us going forward. You won’t want to miss that. Like that old rusty axe head I spoke about at the start. God will make again all things new again. And that will be the biggest blessing of all.

I want to close today on a positive note. It is summed up in two wonderful verses, the first of which is one of my most favorite of all. Isaiah 41:10 “So do not fear, for I am with you; do not be dismayed, for I am your God. I will strengthen you and help you; I will uphold you with my righteous right hand.”  And Psalm 46:1 “God is our refuge and strength, an ever-present help in trouble.”

God loves you brothers and sisters. May God be with you all. Let us pray.
Observance of the Lord’s Supper