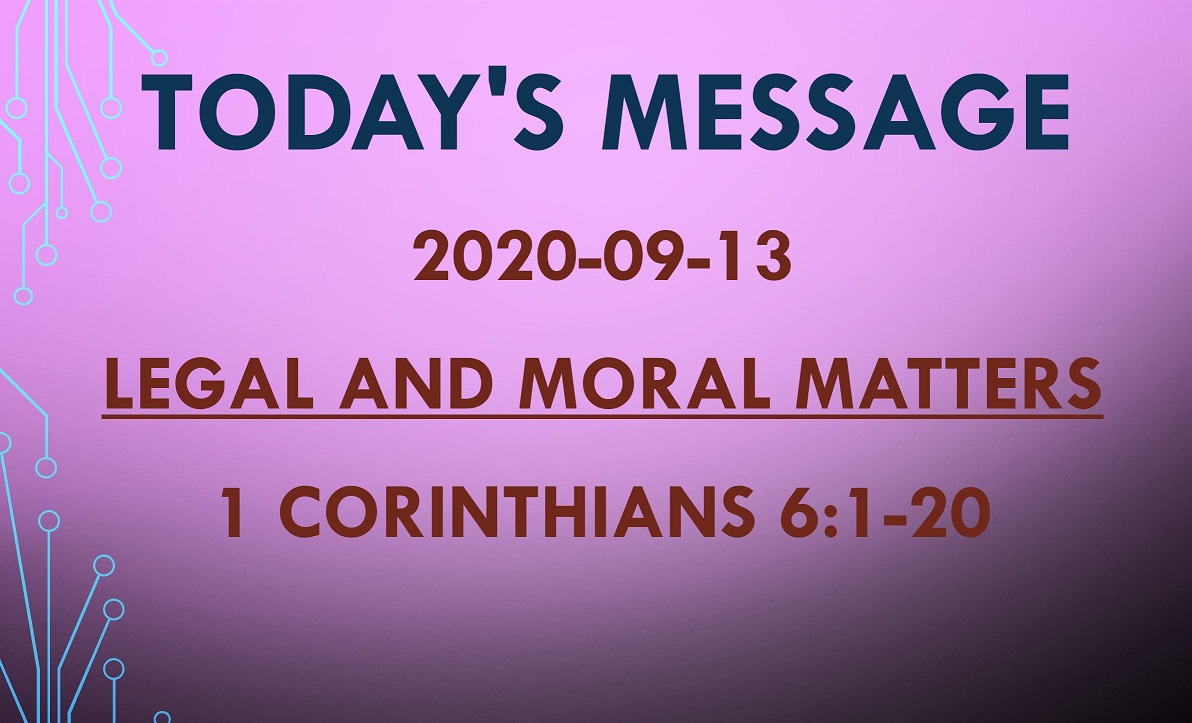 2020-09-13 – 1 Corinthians 6:1-20 – Legal and Moral Matters
Good morning everyone. It is so nice to be able to spend some time with you all in fellowship with the Lord. Thank you and God bless you for being with us.

Have you ever had the privilege of serving on a jury? I have served three times, and each time the crime-case we had was very different from the others. However, the function and instructions we received for our jury duties were pretty much exactly the same. We were not allowed to talk to anyone outside the court. We were to listen to each side of the deliberation and then be excused into a jury-room where we would discuss amongst ourselves the legal statutes for the crime that was committed, and we were to try to come to a consensus of guilty or not-guilty. Then we would present our decision to the judge and the court.
It is a very serious and important role as you are deciding the fate of the person being judged. If you get the opportunity, I suggest you do so, but you don’t have to check out your Christian character in the process.  Today we are going to see some of what the Bible says about both legal and moral matters. I pray you will be blessed by this in some way.

Please turn now to 1 Corinthians 6:1, page 1014 in your pew Bibles, which is the Inspired, Infallible and Living Word of God.   Prayer..

We have been going through this book of First Corinthians that was written by the Apostle Paul. He wrote this letter (or prison epistle) while he was a prisoner in Rome. Paul, who called himself “a Pharisee, born of Pharisees” was an expert about both Jewish and Roman law. Before he was called out by Jesus to be an apostle, Paul was trained in the best of Jewish schools; groomed perhaps, to even become chief priest. So I hope you would agree with me that Paul was more than qualified to write about how the church should conduct themselves. That is what we will see in these first verses of 1 Corinthians 6. Paul wrote:

1 If any of you has a dispute against another, how dare you take it to court before the unrighteous and not before the saints? 2 Or don’t you know that the saints will judge the world? And if the world is judged by you, are you unworthy to judge the trivial cases? 3 Don’t you know that we will judge angels—how much more matters of this life? 4 So if you have such matters, do you appoint as your judges those who have no standing in the church? 5 I say this to your shame!

[Slide] Can it be that there is not one wise person among you who is able to arbitrate between fellow believers? 6 Instead, brother goes to court against brother, and that before unbelievers! 7 As it is, to have legal disputes against one another is already a defeat for you. Why not rather be wronged? Why not rather be cheated? 8 Instead, you yourselves do wrong and cheat—and you do this to brothers and sisters!

This chapter is the most important statement in the Bible on this whole matter of litigation and disputes, court situations in regard to Christian people, people who love the Lord Jesus and are part of His family, His church body. Now, the obvious problem in the church at Corinth was that Christians were suing each other.

You should know that our Christian church was initially birthed out of the Jewish religion. In that, the Jews had a very strong authority and legal structure established. Even the Romans recognized that and leveraged them to arbitrate most all of their own disputes. In fact the Jewish authorities and people considered it blasphemy and against law of God to ever wind up in a courtroom outside of the fellowship of the Jewish people. And for good reason, the Roman government which Israel was now subject to, understood very little about the accepted norms and religious practices of the Jewish people. Paul, in this letter is attempting to put in place that same structure and practice for the new Christian churches on how they should settle their disputes themselves.

You might know that the Romans and the Greeks saw Christianity as a form of or “Sect” of Judaism, and they allowed Christians the same rights they’d always allowed the Jews; that is, they could decide upon their own legal issues. So it was ridiculous for the Christians to wind up in the Corinth courts. That is what Paul is attempting to get them to realize. Paul says pretty clearly in this Scripture a very simple principle, that it is a sin for a Christian to sue another Christian.

Now with this proclamation comes a lot of baggage and I am aware of that. But each situation should be handled with care because God is watching us. When times of challenge comes to us, we should realize that it is a test that God wants you to pass. Paul says here that it would be better for you to be cheated even, before taking it before the civil and pagan court systems. Because from a Christian perspective, who is the ultimate Judge? God Himself. And God knows brothers and sisters, God knows for sure. You have nothing to lose but what He has allowed. And He loves you so. Put your trust in Him and He will take care of you, I promise.

Aside from that, the Bible tells us over and over again take our disputes, take our grievances to one another first to resolve, and we are to leverage God’s word and God’s will in the process. If that doesn’t work then bring it to your church leadership. That is the process for handling disputes between Christians. It hurts my heart, as it obviously hurts Paul’s heart to see Christians fighting each other especially in the civil courts. When we do that, I feel satan is laughing at us. The world laughs at us. And we lose the opportunity to show them God’s grace and mercy in practice. And we lose the opportunity for them to witness Christ in us.

Paul continues now at verse 9, talking about what separates us from the world:
9 Don’t you know that the unrighteous will not inherit God’s kingdom? Do not be deceived: No sexually immoral people, idolaters, adulterers, or males who have sex with males, 10 no thieves, greedy people, drunkards, verbally abusive people, or swindlers will inherit God’s kingdom. 11 And some of you used to be like this. But you were washed, you were sanctified, you were justified in the name of the Lord Jesus Christ and by the Spirit of our God.

Simply put, Paul was saying “Why would you take your disputes before unsaved people and not before the saints who know the Word of God and believe in God’s principles? The saints are the ones possessing the Holy Spirit and can allow the Spirit of God to lead in their decision making.” Yes, all Christians are sinners that are saved by God’s mercy and grace. But we are also students of His Holy Word and we have the Holy Spirit guiding us. That is what Paul is trying to get them and now us to realize. We can empathize, judge and apply correction along with grace and mercy better than any civil court could ever do. This church family is more than just a place to gather for fun, worship and learning. It is also where we hold each other accountable and wrestle with the hard things life brings to bare.

However, the body is not for sexual immorality but for the Lord, and the Lord for the body. 14 God raised up the Lord and will also raise us up by his power. 15 Don’t you know that your bodies are a part of Christ’s body?

[Slide] So should I take a part of Christ’s body and make it part of a prostitute? Absolutely not! 16 Don’t you know that anyone joined to a prostitute is one body with her? For Scripture says, The two will become one flesh. 17 But anyone joined to the Lord is one spirit with him.
18 Flee sexual immorality! Every other sin a person commits is outside the body, but the person who is sexually immoral sins against his own body. 19 Don’t you know that your body is a temple of the Holy Spirit who is in you, whom you have from God? You are not your own, 20 for you were bought at a price. So glorify God with your body.

This is the Bible given to us by God for instruction and reproof. As a Preacher I try to balance bring God’s word in context for the benefit of all the people. But as a Pastor who cares for his flock, I try to be sensitive to the dynamics and maturity of the listeners so as not to spark a fire of challenging thoughts for all the ears that hear. That is a tough deliberation let me assure you. So some topics I will not expound upon in mixed company, but I offer up to you my council if anyone would like to further elaborate on these sensitive issues. Is that okay?

But you might be asking yourself why Paul would go right from legal matters to these moral matters. Well you might recall from the last chapter that there was both a moral and legal issue of incest that he was dealing with in that Corinth church. Paul instructed them to remove that immoral Christian from their membership. In this last paragraph Paul now goes a little more in detail in regards to their understanding of right and wrong in regards to sexual purity and practice. As we all should realize sexual impropriety is something that plagues our society even today. It could be the thing that causes our church family much pain and suffering, let alone the physical challenges that it could bring to bare. Paul says very clearly that “your body is a temple of the Holy Spirit”, and “you were bought at a price. So [please] glorify God with your body”.

And when you have the privilege of helping somebody with their sin problem, or judging somebody within the church family, then keep Jesus’s instructions in mind: [Slide] Matthew 7:1-3 “Do not judge, or you too will be judged. For in the same way you judge others, you will be judged, and with the measure you use, it will be measured to you”. Then the next verse says, “Why do you look at the speck of sawdust in your brother’s eye and pay no attention to the plank in your own eye?” So we are to judge others within the church, but before you do, get that plank out of your own eye first, and get on your knees and pray about it.

As church members, and as citizens of the world, you might serve one day as a jury member in some regard. However just as I was briefed in the court on the statutes of the civil law, we all should be studying to be approved so that we can rightfully apply God’s word to the situations we will face. But the key to all that is simply that we should let grace and mercy lead the way, because that is what Jesus did for so many, and that is what God has done for you.

Would you please rise as we prepare for our closing hymn.

Let us now close with prayer